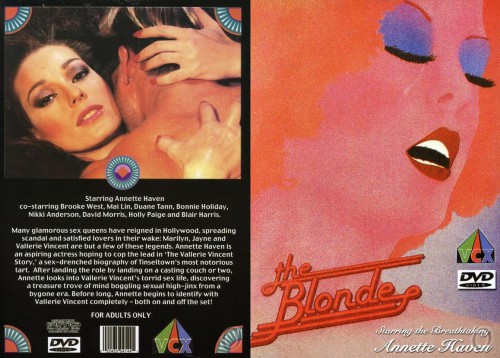 Starring: Annette Haven, Brooke West, Mai Lin, Dhaije Taan, Bonnie Holiday, Blair Harris, David Morris, Holly Page, Harmony, Nikki Anderson
Description: Vallerie Vincent was Hollywood’s reigning blonde sex queen until her mysterious and tragic death. Now, several years later, every aspiring actress is vying to play her in the steamy new motion picture based on Valerie’s life. Along the way some strange facts are discovered about Vallerie’s disappearance and some rather shocking ones about her early film career. Annette Haven, the reigning queen of adult movieland, appears in the dual role of Valerie and an aspiring actress hoping to play her. The sensitive, sad, sexy blonde is now Annette, joining the years of Hollywood’s sex queens like Marilyn, Jayne and the rest. Along with Annette, the Lewis Brothers of Detroit have brought together the exciting Brooke West, Dhaije Tann, Bonnie Holiday and introducing oriental beauty Mai Lyn. Hollywood has for years exploited and enjoyed its platinum queens, and now adult filmland has its own. Annette Haven is the Blonde.