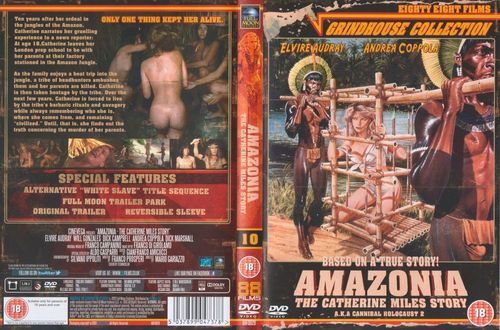 Starring: Elvire Audray, Will Gonzales, Dick Campbell, Andrea Coppola, Dick Marshall, Alma Vernon, Grace Williams, Sara Fleszer, Mark Cannon, James Boyle, Peter Robyns, Jessica Bridges, Stephanie Walters, Neal Berger, Deborah Savage, Kim Arnold, Rik Battaglia, Pat Starke
Description: It took four years after the success of Umberto Lenzi’s classic gut-ripper CANNIBAL FEROX for the Italian nasty native film to make a comeback and the first frightener to crawl out of the jungle squalor was AMAZONIA also known as WHITE SLAVE. Telling of a frequently naked western blonde (played by the gorgeous grindhouse sex symbol Elvire Audrey) who is captured, stripped and tormented by a group of jungle headhunters, AMAZONIA is perfectly fitting with the sleaze and schlock that this torrid trend became known for! Finally unleashed uncut and in HD by 88 Films, AMAZONIA is a must-see Italian shocker that perfectly compliments the excess of such video nasty gems as MAN FROM DEEP RIVER and CANNIBAL HOLOCAUST!!!
An 18 year old Catherine Miles graduates from her boarding school and takes a trip with her parents to the Amazon. While on a boat ride, her parents are brutally murdered by a local cannibal tribe and she is taken prisoner. In order to survive, she adopts the customs of the tribe with the help of a warrior who has fallen in love with her, all the while planning vengeance for her parents’ death. He later helps her to escape, and now free, she goes to find who exactly was behind the death of her parents 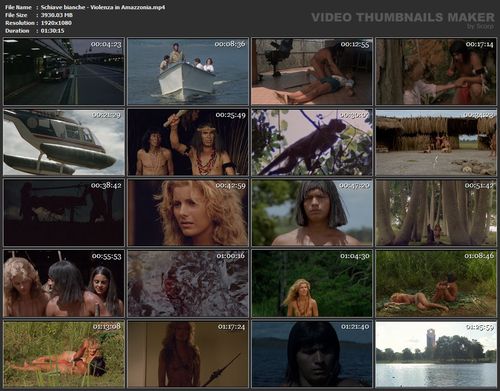